The Gift of Talk Therapy for Homeless Men

Dr. Ed Schultze received his doctorate in psychology from Fuller Seminary and has been working in the field for about 50 years. He has worked extensively both in pastoral care and in the mental health departments of multiple correctional facilities, where he specialized in suicidality assessments.

Now he volunteers at the UGM Men’s Shelter as a volunteer psychologist.

Ed says it’s difficult to talk about homelessness without the subject of mental health arising.

“On a given night in January 2010, 26.2% of all sheltered persons who were homeless had a severe mental illness.” - Substance Abuse and Mental Health Services Administration

This statistic does not account for mild or moderate cases of generalized anxiety, post-traumatic stress disorder, or any number of mental health conditions that may be more easily masked. 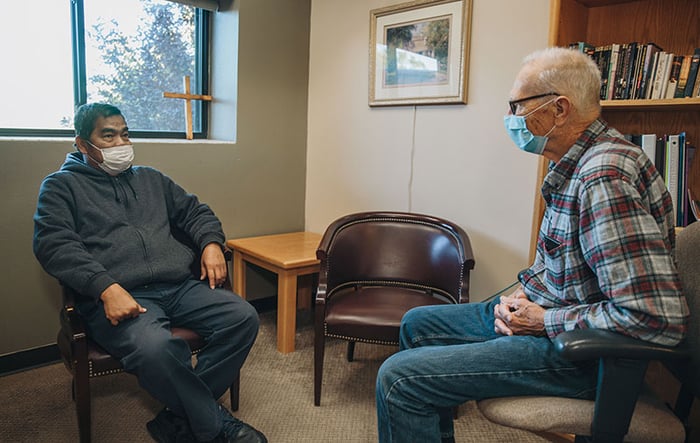 He says that, generally, a person’s mental health status is a result of so many factors that it cannot either be clearly attributed to their homelessness or proven to be a direct cause of it. But the interweaving correlations are undeniable.

“The deprivation [of homelessness] definitely factors in, when you don’t have the underlying security—basic shelter and provision—if you don’t have that, you’re in survival. Individuals who are survivors operate differently than those who feel comfortable. So [UGM] is a good place for them to work on things because it’s very safe. Shelter and food are provided, so they can work on life issues. It’s a good place to be given an opportunity to do some introspection and mental health work.” 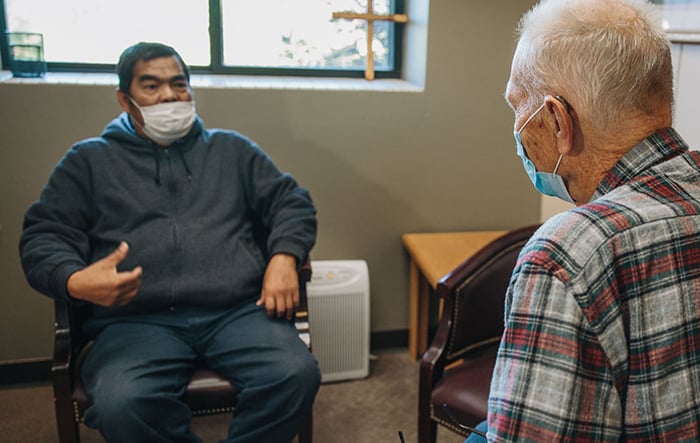 He says the first step to understanding what’s behind a person’s struggle with homelessness or debilitating addiction is to get to know them. Pastor Ron, UGM Chaplain, screens guests who may benefit from counseling or mental health therapy, and depending on the potential complexity or severity of their mental condition, either refers men to a behavioral health expert for clinical evaluation, or he recommends them to Ed for support counseling.

“Some of them are cautious and some become very trusting, but like any relationship, it takes time to build the trust. I just try to listen well and then respond to what I’m hearing.”

It’s not his job to diagnose schizophrenia, depression or any other mental illness, but he is tasked with uncovering clues that could help these men pursue a diagnosis elsewhere if needed.

Over his six years with UGM, he has witnessed many revelations when something clicks where a client can start to see why he’s exhibiting the behaviors that have led him into homelessness or addiction. “That’s really satisfying, seeing that ‘aha’ moment.” 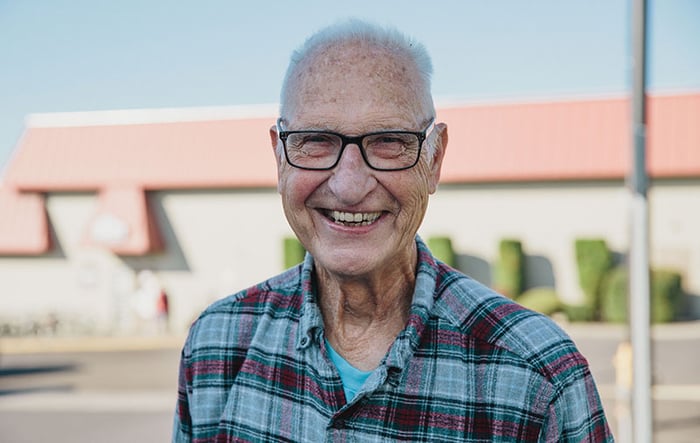 Ed also works with men who are going into UGM’s five-phase Recovery program.

“I love seeing people make it all the way through the program, and graduate, and learn to handle life. Seeing them get that goal, and a hope. But even guys who are not going into program, if they’re here and they’re willing to get some mental health counseling, I love that. And there’s hope that things can get better for anyone.”

He says volunteering at UGM is “Time well spent.”

“I grew up, almost as a 'delinquent',” he says. "My dad was an alcoholic and my mom had mental health issues, and I became an adult too young, so I think I have some tendencies toward addiction… I became a workaholic, striving to achieve. I can see now that it wasn’t always good, but at this point, it’s more about ‘how do we do it differently now that we know?’ you know?”

So today he uses his expertise to love a population that cannot give back, except in gratitude.

Ed and his wife have been married for 56 years and raised three children. Today, they enjoy living with one of their daughters and their 12-year-old grandson in a three-generation home. Ed lives a quiet life, but his impact is huge.

Pastor Ron calls him "Amazing Ed" and says, "He has helped many men walk out of darkness and into the marvelous light of freedom in Jesus Christ – I am blessed to have him as my volunteer and friend."

The Government Agrees: "Housing First" isn't Working
Winning Essay: What I Wish People Knew About Homelessness
What Causes Homelessness? (It Isn't Always Addiction)
In Their Words: Two Men Share Their Stories of Recovery