Homeless and Nowhere to Be

Kari had been walking for four days. Literally.

She wasn’t going anywhere. She didn’t need the exercise.

She was walking because her life had come to a standstill. She didn’t know what else to do. She had nowhere to be. 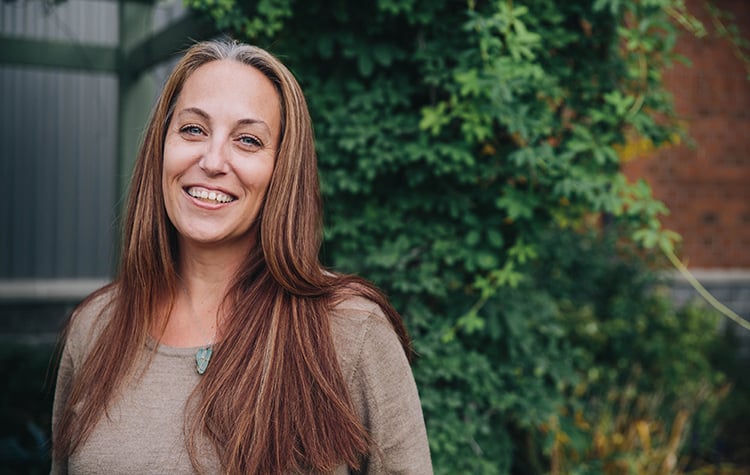 Unlike many residents at the UGM Center for Women and Children, Kari grew up in a relatively healthy, supportive family of origin. She has fond memories and healthy family members. She went to church as a girl. She was heavily involved in dance, finding joy and self-expression in her classes four nights a week.

Then a four-wheeler accident at age 17 broke Kari’s back and ended her dance prospects for good. The loss and disappointment gave deep-rooted strength to a growing alcohol addiction: “Alcohol is my demon.”

After many years of pain and broken trust with her family, children, and employers, Kari finally pursued sobriety – and by all appearances, she was successful. She made it to two years sober.

But she still hadn’t really dealt with what was underneath the addiction. “It shows how twisted my life was for me to think that to have a good time I still needed to do drugs or something. So I did meth.”

Unsurprisingly, her life began to crumble again. She got stuck in a co-dependent relationship and lost her housing. She could tell things were going south quickly, but she only had the wherewithal to protect her children, not herself.

“I called my mom and dad and said, ‘I need you to take the girls.’ I wasn’t about to take them down that road with me.”

“That road” was indeed downward. Kari didn’t have any issue with quitting meth, but her relationship addiction was killing her from the inside out. Eventually, Kari and her boyfriend were living in their car in the parking lot of a casino, and she still didn’t know how she could possibly leave him.

Her boyfriend picked up a raging gambling addiction and lost whatever money happened to come their way. Kari would sit wrapped in blankets in the car or hang around the casino for hours on end to stay warm.

“He was in a whirlwind of his own, and I would cry all the time, and he would tell me, ‘You’re so miserable. All you do is cry.’ I said, ‘Because I hate this world.’ I knew how bad I hated it, but again I didn’t know how to leave him. … I felt like a caged animal. I didn’t know how to get help or what to do, but each direction I’d turn to try to save myself, it wasn’t working.”

Her parents, burned too many times by broken trust, had cut off all support. And Kari was too ashamed to contact her children. “My spirit was so low. I was hopeless. I thought my family would never talk to me again. I didn’t know how to ever get back with my kids.”

Months went by in this cycle of shame and misery, but it had to get even worse to force Kari to seek the help she needed. When her boyfriend went to jail and she lost her car, she had nothing. She was welcome nowhere.

So she walked, up and down the casino, day and night. Because if she stopped, somebody would ask her what she was doing there.

A place to be

Finally, Kari had no choice but to ask for help. She got back in contact with her parents and kids, who urged her to come to UGM. 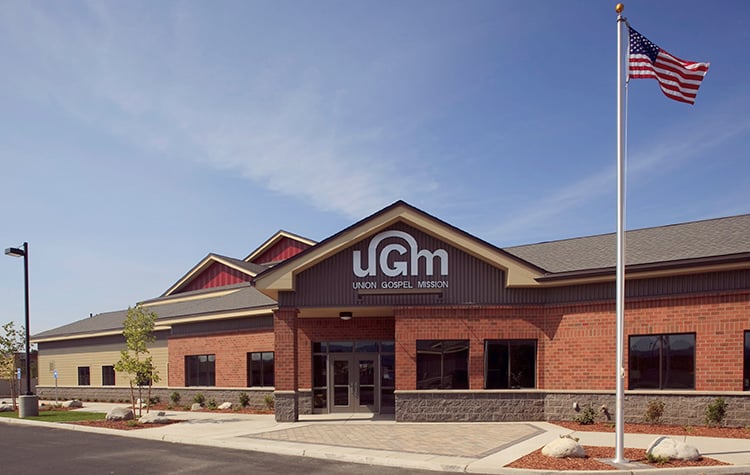 The length of the recovery program – up to 2 years – still just seemed impossible and unnecessary to Kari: “I was still sober from alcohol and I could walk away from meth with no problem. … But I think it was my mental health more than anything, how low it had gotten, with lack of sleep, lack of nutrition, everything was just really poor.”

So Kari came to UGM just to get a reprieve from a “dark, dark world.”

“I just want somewhere to be: Be safe, be healthy, be warm, be wanted, be welcome. … I never had a bed at houses when I stayed there – it was the couch or the ground. So even just to have a bed was incredible.”

Soon, though, she began to absorb more of what the Center offered. The staff and volunteers were consistent and caring. After a few years living in the meth culture, where “nobody cared about each other and everybody tried to rip each other off,” their integrity got her attention and reminded her of the world she grew up in. She wanted to be like that.

“They were that warmth. They were that genuine smile. … They were the loyal people that kept coming every week, that said they would come and they were here. Their word was their word, and I always want my word to be my word.”

Like any recovery journey, Kari’s has had a few bumps in the road. But for her, the key is a new way of looking at the world and dealing with the bumps.

The biggest lesson was to reject passivity and take responsibility for her choices, even when they’re hard. “Every single thing we do is choice,” including responses to people and situations – what she allows herself to do and say when others annoy or mistreat her.

The second big learning point for Kari was self-awareness – her counselor helped her learn to be more mindful of what she was feeling and why: the emotional underpinnings for her choices.

She recounts a simple memory from when she was doing her business practicum at HRC Ministries for the recovery program. She was doing paperwork in a back room, and her co-workers asked why she looked so happy doing something that most people would say was boring or insignificant.

“I was just actually being kind of self-aware of what I was feeling.  In the past, I usually wanted to be out where the world was.  So with this door open and on a busy intersection, I would have been yearning to be out there.  Like, ‘I don't want to be at work, I don't want to sit here, I want to be out there.’ And I said, ‘But I am so satisfied sitting right here, doing something I love to do. I'm healthy, I'm safe right now.  Out there, there's headaches out there and it's crazy.’ … I've been recognizing how satisfied I was doing something. So I could take that further now, finding something that satisfies me that same way.”

Walking with the Lord 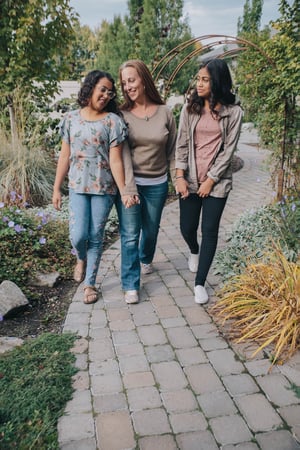 Kari takes her recovery one day at a time – even through a couple of relapses during the program, she was successful because she chose to move forward and try again instead of giving up in shame and going back to her old life.

“I don’t feel like I walked through that walk for it to go to waste and just go back. God had me that entire time: I’m not dead and I’m not in prison. I feel like he protected me. I feel like he got me here to heal from it and learn from it.”

Kari is also working on her relationship with her daughters, approaching her own failings and theirs with openness and honesty – and grace. “I was able to share the difference between shame and guilt. We can be a little guilty, we made a bad choice. But you don’t have to be covered with shame. … You may have some effects from your choices now, but it doesn’t change my love for you, it doesn’t change anything.”

Kari’s oldest daughter, Jessie, got married in August, and Kari was delighted to able to be there to support her daughter. “In the past, I wouldn’t have been wanted or welcome there. I was very chaotic and they wouldn’t have known what state Mom would come in or how drunk I would get.”

Right before the ceremony, Kari’s mom looked over and said, “I want you to know the biggest gift here.  … The biggest gift is that you’re here as Mom.”

Kari is working on securing employment and moving into her own place with her younger daughters, Jayden and Michayla. But this time she wants to walk purposefully, following God’s will.

“I don’t want to get ahead of God. I always have tried to figure it out and do things my way and I don’t want to. I’m not good at doing things my way. I mess them up. And so I’m just trying to walk in that peace and His will. I pray every day, ‘Lord, your will, your way, and don’t let me get in the way of you.’ ” 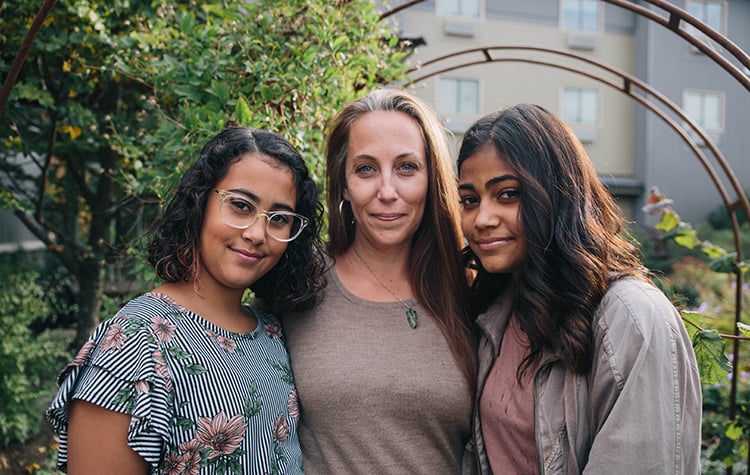 You can help the Center for Women and Children change the lives of women like Kari. $90 provides one week of safe shelter.