I was homeless and you gave me
A SAFE PLACE.

The Union Gospel Mission served more than 4,000 women and children in 2012. 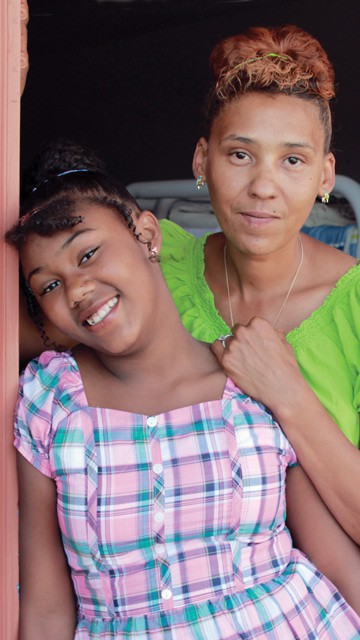 The Crisis Shelter on East Sprague in Spokane is bursting at the seams. Determined not to turn anyone away due to lack of space, the Shelter is currently housing an average of 395 guests per month. Three mothers and four children in one motel-sized room is not uncommon. Mattresses are spread on the floor in an overflow room in order to accommodate everyone. Some guests are detoxing. Some are polishing resumes and preparing for job interviews. Ex-boyfriends and dealers show up at the gate unexpectedly. Boy Scouts come to do service projects. Mothers carry toddlers on hips and push babies in strollers. A volunteer hands out ice-cold water bottles on hot summer days. Women hold hands and pray for each other in the smoking area. Police and Child Protective Services are well acquainted with the address – 1234 E Sprague Ave. - next door to the former headquarters of Hells Angels  and across the street from a bikini espresso stand. At times, the environment seems chaotic, and yet, again and again, guests insist the motto on the marquee is true: “Hope starts here.”

Carmen’s oldest son was killed in a drive-by shooting in Detroit when he was 17. His death derailed her. The mother of seven, she had always told her children, “We might live in the hood, but we don’t have to be part of the hood.” She believed in God, but where was He?

Carmen, 38, and her 10-year-0ld daughter, Deshira, moved to Spokane five years ago to start over, but Carmen had lost her way. She was just going through the motions. After she was let go from her job, she and Deshira moved in with one of her adult daughters, Alana. It wasn’t until Alana moved to Seattle and Carmen and Deshira were forced to come to the Crisis Shelter that Carmen began to wake up.

“When we first got here, we looked at each other like, Oh my goodness. How did we get here? But once we let all that fear go, we opened our minds and our hearts and realized this is a safe place for us.”
The educational modules at the Crisis Shelter helped Carmen get re-focused and set realistic goals. Now she’s studying for her GED and plans to attend community college to become a medical assistant. Through the Shelter’s collaborative efforts with other organizations, Carmen found affordable housing, rental assistance and financial aid for schooling. Most importantly, Carmen said, “[Being here] helped bring me back to God. This is an awesome place.” 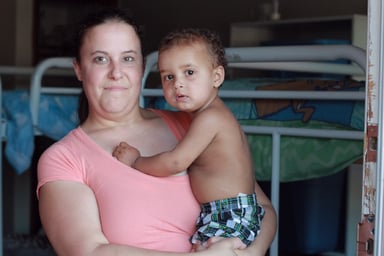 At 37, Rebecca realized her life had been one big crisis. She left home at 14, and for the next 23 years, she ran from one addiction to the next. “I would quit doing drugs and then I would like gamble, and then I would stop, and then I’d find a guy, and then all of a sudden, I’m drinking, then I’m doing drugs again and then shopping or eating too much or just…always something. I really need an overhaul.”

Rebecca and her two-year-old son, Julian, were living at Friendship House, a transitional home in Mt. Vernon, Washington, but Rebecca kept relapsing. She had already lost custody of her two teenage daughters, and she didn’t want to make the same mistakes with Julian. She told the staff she really wanted to change. They told her she needed to get away from old friends; so they went online, found UGM Women’s Recovery at Anna Ogden Hall, and paid Rebecca’s bus fare to get her here.

Rebecca and Julian are staying at the Crisis Shelter while they wait to get into Anna Ogden Hall. “I’m tired of repeating the same stuff, you know. I want it to stop.” 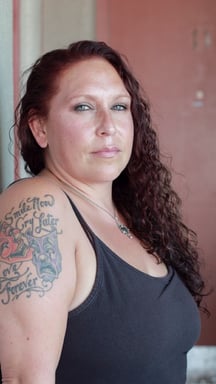 The “same-old, same old” for Faith was using and dealing drugs. “I always thought I was a responsible drug dealer. I never sold to kids and I never sold to pregnant women, but I don’t know how many addicts I made, you know.” And then there was the anger. “I got ripped off too many times within one week, and I kind of snapped and that’s what ended me up in jail. . . Getting to that part of my being and seeing how nasty it really is upset me greatly. I knew I didn't want to be that way anymore.”

But how do you change when everything you've ever known and everyone with whom you’re connected pulls you back?

Thick, white scars cover Faith’s left arm where she has repeatedly cut herself. “I was doing it because I knew how to fix these wounds, you know. I knew how to nurture this. I didn't know how to nurture the emotional pain.” Faith ran away from home at 12. “I've been on my own since then.” On her own with excruciating pain, numerous hurdles and limited choices.

After four months in jail, Faith’s probation required her to stay in the area. Calling on the only friends she had, she ended up sleeping on a couch with drug deals going on all around her.  “I would wake up to somebody having to take a hit in the bathroom because they couldn't even get their day started without their heroin.” Being around the drugs was a violation of her probation, so Faith made her way to the Crisis Shelter where she found a drug-free, stable environment. Life isn't fixed, but for a period of time, Faith isn't alone and she has a safe place from which to figure out the next step.

“God, in His mysterious ways, has done whatever He does and put me where I needed to be. Period. You know, I truly believe that.” 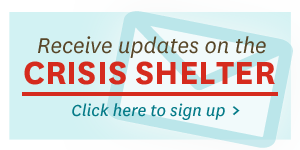 Click here to see all articles for the September 2013 issue.